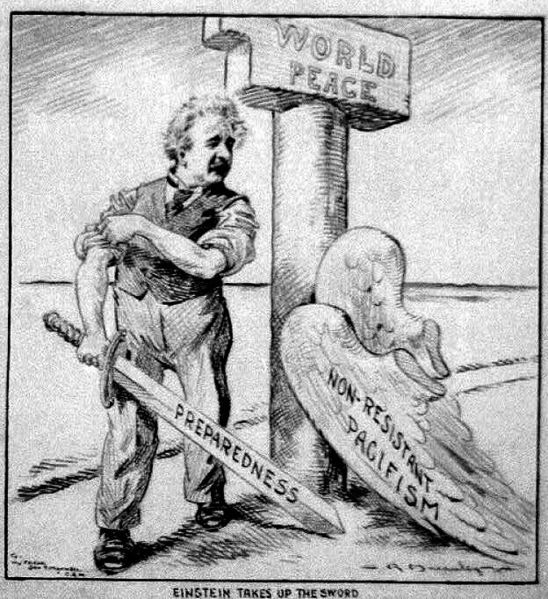 Myth: Einstein was an incompetent mathematician who was also responsible for the creation of the nuclear bomb.

Well as most people already know, Einstein (which oddly seems to translate in German to the name “1 Beer Keg”) was a very accomplished mathematician. The myth about him failing at math has been encouraged by television works from the cartoon kids show “Animanics” to Sci Fi Shows like “Star Trek the Next Generation”.

The internet on the other hand, has done a pretty good job dispelling the myth that Einstein couldn’t add and subtract.

However, for some reason, anti war “do gooders” feel the need to blame Einstein for something Oppenheimer and Fermi made (the Nuclear Bomb).

Einstein had almost nothing to do with the creation of the nuclear bombs Fat Man or Little Boy. He was given a piece of paper to sign that said he endorsed moving forward with the technology because other countries probably already were, but that was pretty much his entire contribution to the nuclear bomb.

Now some people will argue the the nuclear bomb was created by his E = MC2 theory of relativity.

This however, is also wrong.

Although E=MC2 (A “Thing’s“ Energy is Equal to its Mass times a Constant {speed of light) Squared) is an energy conversion ratio that can be used in the calculation of energy dispersion from a potential nuclear explosion or power plant, it is absolutely redonkulous to think that this makes Einstein responsible in anyway for killing 200,000 Japanese people with a nuclear bomb.

As well, the E=MC2 wasn’t even part of his theory of relativity, It was just an after thought (probably so he could sound smarter than other people)

in fact, if he told people in plain language what his theory of special relativity actually meant, most people would have probably thought “Yeah, so what?”

Here’s the theory of special relativity in one sentence:

As you can see, special relativity is much easier to understand than than his theory of “General Relativity” which probably requires the use of hallucinogenic drugs to understand fully.

The Psychedelic Experience: A Manual Based on The Tibetan Book of the Dead

Myth: Gallileo Dropped Things from the Leaning Tower of Pisa

We’ve all heard the story about how Galileo dropped two balls from the leaning tower of Pisa and how this proved the weight of an object did not affect how quickly it fell to the earth.

Why did he do this?

Was it to dispell the myth that dropping pennies from tall buildings can kill someone by sinking into their skull?

Unfortunately not, that myth is still believed.

What did happen was that Galileo thought to himself:

“If I throw a ball, it will land on the ground, but since the earth is curved, it will land in a lower and lower spot the farther I throw it. In fact at some point it won’t land at all because the ball will always be falling lower. This means the ball will be traveling due to the force from falling rather than me throwing it. Actually I better duck because its only a matter of time before it goes around the earth and comes back to hit me in the back of the head.”

Okay, this may not be an exact record of Galileo’s train of thought, but its close enough to point out why he began his experiments with gravity.

The Ball experiment was not done from the leaning tower of Pisa but actually accomplished using 20 foot planks with a straight smoothed out groove in the center.

By rolling different balls down a plank from various heights, he was able to discover that the length the ball rolled was directly proportional to the square of the time taken. This was contrary to Aristotle’s view that would have predicted the velocity to be constant.

photo thanks to Wikipedia

Myth: Edison was a genius inventor

We at Daft Gadgets share a collective view that this was not a myth, and that Edison was a genius inventor who made the biggest invention in history.

However, what he actually invented remains up for debate.

When Edison wasn’t electrocuting cats in bath tubs to prove that DC current from Westinghouse was safer the Tesla’s AC current, Edison was known for inventing things.

His greatest known invention was probably the electric light.

Too bad he didn’t actually invent it.

In 1809 Sir Humphry Davy invented the first electric light which allowed miners to see in the dark that wouldn’t ignite a methane explosion that would kill them them all. This was a pretty big deal back in the day.

So what did Edison invent?

See, Edison realized that there was no such thing as invention or originality, only creativity.   He probably looked at Leibniz and Newton who both “Invented” Infinitesimal Calculus in two separate ways (Newton liked to play with waves and Leibniz liked to play with triangles) and thought to himself:

“Invention is just who gets the credit not how creative you are!”

He would then go on to subconsciously create the greatest invention of them all…..The Patent office. Controlling the patent meant that the invention credit would all end up in one place, and coincidentally, so would the money.

The Patent office was the most profitable invention in human history.

Don’t believe us? Who got richer for the invention of the telephone, Alexander Graham Bell, or Elisha Gray?

To be fair, Edison did come up with idea of saying “Ahoy Ahoy” when answering the phone, and we all know that caught on real well.