Throughout history there have been men in bars. This may be because men feel that woman are easier to impress when they are drunk, or it may be that defeating other males in trivial bar games gives them back the feelings of superiority they once had before they were married, or they may just go there because they don’t have any friends who go anywhere else like hunting, fishing, golfing, or other common escapes used by men.

Although most wives are probably glad to be rid of their husbands for a while, there are times when both men and women can use a home style bar to entertain guests.  But what type of cool bar gadgets will have your guests asking “Hey these guys are cool, why isn’t there a tip jar at this home bar?” or “Why won’t this fish tank flush?” The answer can be found in the Bar Stuff section of the Daft Gadgets gift shop.

The floaster floating coasters make your wine glasses appear to be levitating off the ground! 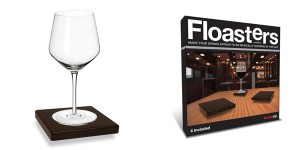 Now we know what you are thinking. “We saw how David Blaine pull off this stunt with a pair of cheap running shoes”  However, believe it or not, levitating still impresses people. Why, because humans are slightly warped. Just the idea that something might fall and shatter to the ground gets us excited, that’s why there are always crowds around suicide jumpers. Even though the floating coasters wont let your drinks fall down in a pool of red wine, they wont disappoint your guests.

We like to pretend we are holding them up with the Force. But to each his or her own.

A flashing pub mug may be to your liking, even if it just functions as a homing beacon for when you wander to far away from your glass.

If beer is not your thing, there is also light up shot glasses, and light up led ice cubes.

Of course the coolest of all the light up bar stuff is probably the LED sound sensitive ice bucket.
Just throw in a bottle of your favorite crystal and a bunch of ice and the baby will produce a light show that practically dances to the music you’re playing.

Do you like your Martinis Shaken or Stirred? Or do you secretly hate martinis and only order them so you can feel like James Bond? 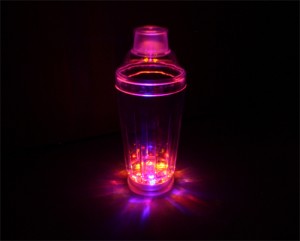 Daft Gadgets carries a light up cocktail mixer if you really want to shake things up. It flashes yellow, red, and blue lights mesmerizing your guests (its a documented proven scientific assumption that drunks are attracted to blinking flashing lights)

Of course if you order your martinis stirred, simply so that others know you aren’t ordering it to look like James Bond, you may prefer the tornado cocktail mixer. The tornado mixer is more of a serious metal geek contraption and less of a piece of plastic. Its doesn’t light up in nice beautiful colors, but it gets the job done right and lets your gets know that you are a professional bar tender, superior to Tom Cruise in cocktail and worthy of the title “Bar Chef” 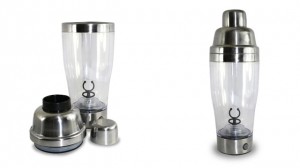 If wine is your thing, look no further.

If you’ve seen our floating coasters, you may see our magic wine bottle holder and say wtf? How does this work?

The trick is “Science.” Yes, believe it or not, magic has been taking credit for science for a very long time now, however unlike magic, science is most likely not the work of the devil.

The magic wine bottle holder uses its own weight to hold itself up, which at first appears to contradict science. The best part is that the magic wine holder is another great way to confuse drunks.

Of course, what would any wine drinker be without a wine kit for opening the precious juice of the gods? 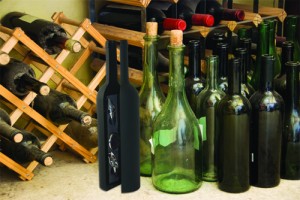 If you find yourself fumbling with the tinfoil like an over anxious teenager with a condom wrapper, look no further. The wine bottle kit comes with a foil cutter, bottle pourer, collar, stopper and a lever style corkscrew.

If a manual corkscrew is not your thing, you can try an electric one. Not just a great way to remove brains while mummifying dead bodies, an electric corkscrew lets you open your bottle almost instantly, so that no valuable drinking time is wasted.

However if you are not a big drinker, or if your cheap and don’t like to leave your wine at a guests house after opening it, you can preserve it with the automatic wine preserver. It has a vacuum pump that removes the air from your wine bottle so the wine doesn’t keep aging to its death. It can also keep your bubbly…bubbly if you are in the mood for celebrating. 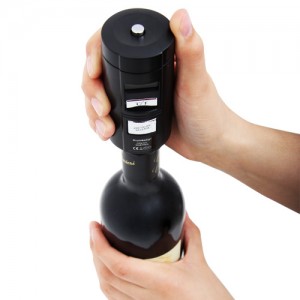 The biggest downside of the electronic gadget is that it removes the excuse to drink the entire bottle due to waste.

What home bar would be complete without a beer pong table?

Either way, its a win win game.

If you have a home bar or are looking to start your one, you need to check out the Bar Stuff Section in our Gadgets Shop. Not because getting drunk isn’t fun without gadgets, but because its better!