Clock watching isn’t just a past time for frustrated cubical workers and people on the edge of their sanity waiting to go Cukoo (not a reference to our article on the thieving bastard cukoo bird) Even people enjoying themselves are bound to do some clock watching from time to time, be it testing their stamina, waiting for a time bomb to destroy their enemies, or just because the clock in the room is just that freakin cool to look at.

Is it hot in here or is it just surreal?

When he painted it was claimed that: “The soft watches are an unconscious symbol of the relativity of space and time, a Surrealist meditation on the collapse of our notions of a fixed cosmic order”.

But according to Dali, the soft watches were inspired not by relativity, but by melting Camembert cheese.

Do you ever feel like you’re in Bizarro world? Does time feel like its moving backwards when you are at work? If so you are not alone.

The Backwards clock is a device constructed by sick minded employers who like to make their employees feel trapped in their jobs. Luckily though, its also really cool way to confuse people when they enter your home.

Warning: On occasion the backwards clock can be misused by teenage boys to keep young girls out past their curfew. Okay, these come in other neon colors too, but blue is a naturally cool color. And What could be cooler than neon?

This Cool Clock is a one size fits all. Kind of like an adult onesie for Paraphilic infantilists, but a little less disturbing.

Who wouldn’t want to wake up to a pole dancing woman? Okay, fine. This ones only 50% cool, depending on which 50% you are part of.

The Gun and Target Alarm Clock

Unlike that evil “teasing” pole dancer alarm clock, the Gun and Target alarm Clock lets you start off your day with a Bang!

The best thing about it is that you can record your own wake up message, or if you lack imagination, you can also record one of your favorite tunes. We recommend the song “i’ve got you babe” in homage to the never ending Ground Hog Day.

According to “Modern Zombie” Magazine, there is nothing worse than waking up dead. That being said, people who are too lazy to go out and get smoke detectors, usually have a clock or two on the wall. So why not merger them together? Sure, it may go off and annoy you while you are making your grilled peanut butter and banana bacon sandwiches, but it may also save your life. 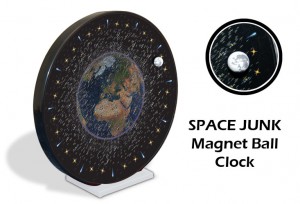 Watch the Magnetic Moon circumvent all the garbage that surrounds our planet! The Space Junk Ball Clock is just a constant reminder that the aliens probably view us as the slum lords of the universe. 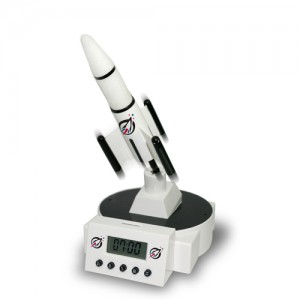 Have Trouble waking up in the Morning? The Rocket alarm clock will sound a count down and if you don’t get out of bed it launches a missile to a very awkward place in the room. Why does this matter? Because if you don’t return the missile to the launch pad the alarm will never stop!

You can find all these cool clocks and more at Daft Gadgets.com!