So, you’ve got the latest and greatest cellular smart phone super handheld turbo techno marvel huh? Sweet. I bet that thing burns through some batteries though. All you need now is a place to set it up so it can charge. You need a cradle for your new baby. A bed to tuck it away so it can rest up and get its juice back. Something to give your wonderful new toy a boost so you can get back to your important work (or Angry Birds or Words With Friends).

Unfortunately we don’t have any products that could help you out. Not a one. Sorry, but we don’t carry any iPod, iPhone, or MP3 chargers at all, in the least, ever, under any circumstances. You are on your own friend. One day soon the battery on your poor media device will run down and then you’ll be out of business. No more phone calls or texting or pictures of funny cats for you. That will be a sad day.

It sure would be nice if we had a great selection of cradles and chargers to meet every taste and need. Maybe some for the office, a few for the traveler on the go, perhaps even one or two for the outdoorsy types. But alas we at DaftGadgets.com simply do not carry any chargers whatsoever, at all. Nope.

Now if we had chargers, and we’re not saying we do, because we don’t, then the Universal Desktop Charger would be a the top of the list. This sleek, stylish cradle is perfect for any office setting. You depend on your phone. You’re contacts, emails, pictures, addenda, and who knows what else is on this small candy bar sized device.

Don’t just throw your phone on the desk when you walk into the office. Don’t let it float aimlessly around your workspace like some sort of techno vagabond. Get your device a home of it’s very own with the Universal Desktop Charger.

Now you won’t have to pick up or hunch over your phone every time you want to access an app because it’s sitting up facing you. With the Universal Desktop Charger your device is always ready for work. When you’re not using it you can use it as a candy bar holder too. And did we mention that its ‘universal’? That means it can charge anything in the universe (probably).

Your boss is calling and he needs figure for the client right now, immediately, at this very instant, no he can’t wait. Unfortunately it’s eight at night and you’re out catching a bite to eat with a very hot date. But it’s all good. You can get everything he needs right from your smart phone.

Ah the wonders of technology. You tend conduct a large portion of your business over and through your phone anyway so this is no big deal to you. In fact, you’ve been on the phone all day long…which is why you’re battery is about to die. Now you’re toast. It took an hour to get this table and your boss isn’t going to accept ‘I forgot to charge my phone’ as an excuse…and where is that waiter with your appetizer? But then you suddenly remember that you have the iPower Station for the iPod and iPhone. Slap it in and voila, you’ve just bought yourself several hours of phone (or music) time.

The iPower Station is a back up battery that plugs straight into your docking station port and being the smart tycoon that you are you never go anywhere without it. Now you’re boss is happy, your date is impressed, and a stern glance from you got those appetizers to the table lickity split. 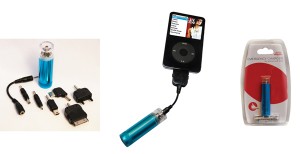 Lets say you don’t own an iPod or an iPhone. In fact, you don’t have any Apple products at all. Not that you don’t have nice stuff. You probably have tons of great devices. MP3 players, phones, cameras, concealed video equipment, listening devices, electric tooth brushes, the works. Well if you’re job depends on this equipment then you need One back up battery to rule them all, the Emergency Phone Charger!

This device is powered by a common, run of the mill AA battery. Plug it in and it’ll give you a few extra hours on your devices. No fuss no hassle no charging it up. As long as you’ve got access to batteries you’ll be set. It’s great for situations where you can’t get to a power source for a while. And the Emergency Phone Charger comes with seven different adapters to fit just about any modern cellular device.

It doesn’t matter if you’ve got a Sonny, Nokia, Samsung, and a Blackberry (why do you have so many phones?) it will power them all equally. The Emergancy Phone Charger is even compatible with iPods…even though we already said you don’t have any Apple products. Maybe you’ll get one for Christmas or something. Who knows? 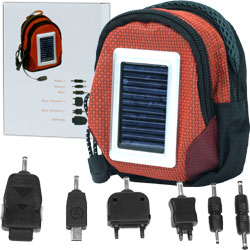 Camping, hiking, and biking are great ways to get away from the stress and toil of the modern word. Getting back outdoors is so invigorating, so liberating. You’ve needed this change of pace for a while now. A chance to just unwind and reboot your system without having to worry about the hustle and bustle of normal life. And yet you still brought your cell phone along any way…just in case. But that’s all right because with the Solar Powered Charger Case you’ll always be able to use your gadgets (even when you’re supposed to be relaxing).

This little pack comes with a solar panel to soak up the suns rays and converts them into electrons for your phone. The Solar Power Charger Case comes with adapters for just about every phone type and it’s also a case where you can store you’re device when it’s not in use (which should be never, because you’re on vacation, remember).

So just chill out, soak up as much nature as you can, and try not to check your Facebook account every few hours. Yes, you’re addicted to your gadgets and the Solar Power Charger Case is a great way to enable your habit, even when your ‘roughing it’.

The world has come to an abrupt end. It’s Mad Max, post apocalyptic, end of civilization time. You’re one of the soul survivors of this barren wasteland. Maybe you’ve got like a dog or something as a companion.Though really, you’ll probably just end up eating him sooner or later.

But thankfully you’ve got your iPod. Humanity might be an endangered species that wrought hell on earth through their greed and pride, but at least you’ve got some tunes to listen to. But oh wait. You forgot your charger back at that nuclear crater you used to call home. Not that there’s any power running anywhere anyways. The infrastructure that delivered all our modern conveniences has pretty much been obliterated at this point. And solar energy is a bust because the skies have been stained black with ash and sin.
Fortunately you had the foresight to bring alone your Wind Up Mobile Phone and iPod Charger!

That’s right, when all else fails you can still cram electrons back inside your magic music box with this hand crank charger. Sure, it’ll take a while but you’re sitting in the middle of a barren wasteland. You’ve got time.