Yes, you heard it right. The Spring line of 2012 RC planes have arrived. We now offer more choices in the 1/5th scale, a new RC Jet, radio control Bi-Plane, a twin engine bomber, and a 100 class micro jet with neodymium magnets for those of you who like to crash from time to time.

The first on our new list of Parkflyers RC Planes is: 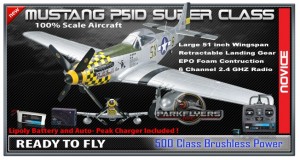 Complete with radio control retractable landing gear, a scale down flap system, and spring loaded damping, the P51D ensures the smoothest of take offs and landings.

The LED lighting system allows you better handling during your night time recognizance. So you have less worries about being shot down by German troops…or just smashing into a tree.

For those of you whoa re unfamiliar with the Mustang, it was an infamous American long-range, single-seat fighter plane that sent 4,950 enemy aircrafts to the scrap yard during WWII. Second only to the Grumman F6F Hellcat This 4 Channel 2.4 GHZ 100% Scale F6F Fighter is powered by a 400 class brushless motor that allows it insane levels of performance. While the scale appearance leaves almost no detail overlooked.

Aside from the amazing detail and action this RC plane offers, the coolest part about this plane is the ultimate realism of it folding main wings!

Completely pre assembled and no assembly required, the Parkflyers F6F RC Hellcat is a no brainer. This 300 class twin engine beast boasts two 180 motors that climb to the sky with tremendous force. This baby locks in to your receiver at a 4000 foot range, so you don’t have to worry about some other RC pilot taking control of your plane.

The P-38 is a great add on to your WWII Collection. The AT-6 Texan was a WWII , single engine advanced trainer aircraft used to train pilots of the United States Army Air Forces, and the US Navy, but for new and aspiring RC pilots, you might want to learn on something a little less advanced.

The AT-6 Texan features 6 channels controlled by a 2.4 GHZ radio control. Built 100% to scale, its massive 51 inch wingspan allows you to navigate through strong winds, while its retractable landing gear allows for a smooth take off and landing.

Here’s a picture of a full size version of the Texan:

Spring is here, so why not take the video games outdoors? The best thing about getting into and RC hobby is that everything you learn has real world applications. The RC planes work under the same rules of aerodynamics as the real ones, so get out there a learn what its like to fly in the sky.