This Redcat Racing tutorial covers tuning your RedCat  engine and understanding your engine’s carburetor. This is a part of a series of tutorials that instructs first time users on the function of a carburetor and tuning the engine afterwards.

It is important to remember that tuning a 2-stroke engine may require skill and patience. You will have to learn skills and a few tricks in tuning a race car engine easily and efficiently. The amount of fuel and air that goes into an engine for burning affects the overall engine performance and all of these are controlled by the carburetor. You need to set the carburetor properly to give the engine the right mixture of air and fuel to burn. This is the tuning process.

There are several terms that you will hear and use as you tune your engine:

Understanding the parts of your carburetor will help you get to know more about its functions. This carburetor slide open sideways, there are several types of carburetors and each one may be different from each other.

The idle speed screw controls the air and the fuel mixture when the engine is set on idle speed. 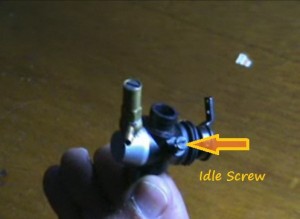 The HSN or High Speed Needle controls the air and fuel mixture when the carburetor is opening from partial to a full throttle speed. 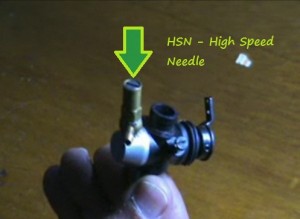 The LSN or Low Speed Needle controls air and fuel as the carburetor is set from idle to partial throttle speed. 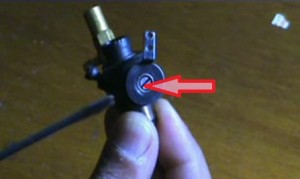 Set the idle speed screw so you can get rid of engine revving and when you want to fix a vehicle taking off right after the car’s engine starts and engine shutting when it is set to brake. Turn the radio on and power the car on. Take your air filter off and set the throttle trim to close the carburetor. Power off the car.

Always set the high speed needle first, you should see visible smoke from the exhaust. Perform tests setting the High Speed Needle and listening for the engine sound. Take note of the difference between a rich and a lean engine. A Pinch Test would help you determine the richness and leanness of your engine. 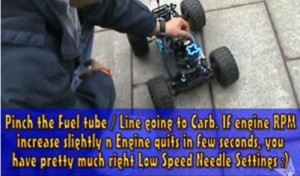