By now everyone knows about the honey badger, one of the most fearless, aggressive animals in the world. And of course there’s the wolverine who, aside from being one of Marvel Comics biggest cash cows, is also a crazy weasel like creature that will attack bears and wolves just for laughs. These are fearless little animals that routinely go up against overwhelming odds. But those are the exceptions, right? Rarely in nature do you see the whole David and Goliath setup working out in favor of the underdog. Normally the big animals eat or at least squash the smaller ones. Usually. But sometimes Mother Nature pulls for the little guy. There are teeny animals out there that simply do not know the meaning of fear or common sense. A few of these munchkins will stand up and throw themselves headlong against behemoths…and win. “The bug in the frogs mouth there is winning.”

Frogs are vicious eating machines.  Yes…frogs. They regularly consume scorpions, tarantulas, snakes, birds, you name it.  They’re deadly, agile and hungry as a hippo…only shorter.  If it fits in their mouth they’ll attack and eat it. But if there is one area where frogs really excel at it’s eating bugs.  What with the long tongue, the pouncing and the huge mouths, frogs were tailor made to destroy insects.  But apparently no body told that to the Epomis Beetle.  This small ground beetle will attack and devour frogs, lizards and salamanders at will.  How do we know this? Because scientist set up Thunder Dome like encounters where the beetle won 100% of the time.  That’s right, 100%! This isn’t a bug that ‘sometimes’ pulls out an upset. It’s a super beetle that apparently cannot lose. Here’s a horrifying video of a little beetle brutalizing an amphibian several times it’s size: 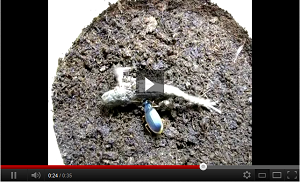 Their strategy is to jump on the amphibian, which outweighs it by a factor of at least 10 and then they start biting it. Do they have some kind of poison? A paralyzing venom to subdue their hippity hoppity foes? No. They just bite him till he dies. That’s like leaping onto a bull and chewing on it till it stops kicking. And not only do the adult beetles eat frogs, but the larva do too. In fact the baby beetles dine almost exclusively on amphibians. And once again, they never lose. Scientists recorded one instance where a frog actually managed to swallow a larva for two hours…he still lost the fight and was consumed by the bug. How do you eat your opponent and still lose?!?

“How many lions has your newborn consumed?”

Groups of small birds have been known to mob larger predators. They’ll do this to chase them away from their nests. Seals do the same things to great white sharks. It’s a common practice in nature for a group of smaller animals to band together to harass a larger predator.  Kingbirds do something like that too, but with just a tad more “Hell Yeah!” mixed in.  A lone Kingbird will jump on the back of a hawk and peck the bird in the head mercilessly!  This little 2 oz menace will ride on the back of a friggin hawk! That’s like a human leaping onto a great shark and continuously bashing it in the skull with a pipe.

He’s not flitting around harassing it. He’s not posturing or making threats. The Kingbird is riding it bareback and stabbing it in the head. How aggressive and/or mentally unbalanced do you have be to pull this off? The Kingbird will peck the poor hawk relentlessly until it leaves the area. And there’s nothing the alpha predator can do but scream and run. They don’t try to fight back. They don’t hang around plotting their revenge. They get the hell out of Dodge. But the real kicker is that hawks don’t even prey on Kingbirds!  They’re way too small. That’s right, the Kingbird is the bully here. He’s beating up the hawk for no reason other than he can.

Sharks are scary it’s true, but they don’t indiscriminately attack people.  Typically shark attacks happen because they mistake humans for seals or all that flailing around in the water makes them think you’re wounded.  It really doesn’t want to eat you.  It’s not hunting you.  Honestly you probably don’t even taste good. In fact, Great Whites have been known to spit people out.  Sure, the odds are you’ll still die from the wounds, but that’s not the point. Sharks do not see us as food. They aren’t just mindless eating machines that the movies portray. They won’t just attack you for no good reason…except the cookie cutter shark.  It will straight up eat you.

This two-foot monster will attack anything, people, dolphins, whales, submarines. It literally does not care who or what you are.  If you move you’re food.  And yes, it has actually been known to attack submarines. The navy has had to replace rubber seals and coatings after these vicious little monsters grubbed on them. It’s called a cookie cutter shark because it swims past at high speed ripping a chunk of flesh out with its melon baller like teeth. The only reason you don’t hear about more attacks on people is because they’re nocturnal hunters. So be careful if you go swimming in shark infested waters at night…although lets be honest, you probably deserve to be eaten anyway.

No one is surprised that ants will attack creatures several times their own size if their hive is threatened or if they have a team to back them up.  They routinely throw away their lives just because. But then some ants take it to the next level, like the Jack Jumper Ant of Australia and Tasmania. 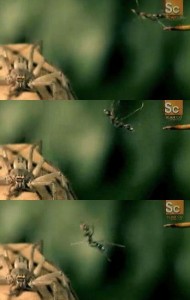 This is the Jack Jumper of Australia and Tasmania.  He’s throwing himself at a huntsman spider who incidentally eats ants for breakfast.  The ant didn’t stumble upon the spider by accident. The spider didn’t come too close to the nest. This lone ant saw a spider and launched itself over a cliff to attack it. Why?  Because Jack Jumper Ants will attack anything on sight.  And unlike most ants they can see quite well and they can leap 20 cm into the air.  If you get within the range you’re food.  Period.  They are extremely aggressive and they will attack anything.  Also unlike most ants the Jack Jumper is very independent minded so they’re solo hunters.  This little insect can single handedly take down a bee or a wasp. It’s only one ant, but it’s wicked enough to capture and kill a friggin wasp on it’s own.

They’re also amongst the most poisonous creatures on earth.  They kill more humans in their native Tasmania annually than spiders, snakes, wasps, and sharks COMBINED.  Yes, this ant is the most deadly killer in an area renowned for its deadly killers. They sting their prey (or anything that’s pissing them off) repeatedly, releasing a venom that ignites the allergic reaction in most humans, leading to death if medical attention is not sought right away.  And don’t think thick clothing will protect you, they can sting right through it.

“He always hogs the covers.”

Most snakes are kind of skittish.  They don’t have legs. They aren’t very tall. They know better than to hang out around larger creatures that can crush them.  The math is pretty easy on this one. If you’re a small animal that crawls around on your belly then stay away from things that can smash you. Even very poisonous snakes are reluctant to bite people because they themselves might be hurt in the process. That’s why rattlesnakes make all that racket. They’re saying ‘hey, I’m over here don’t stomp on me because I will totally kill you, ok.’ But the common Krait of India is either the bravest or stupidest snake in the world. It will actually climb in bed with people.

And this isn’t a case where the snake accidentally blunders into an empty bed because he thinks it’s a good place to hide. They will slither beneath the sheets while people are there. No one is exactly sure why they do this.  Maybe they’re cold.  Maybe they just like to snuggle.  Maybe it’s the fabric softener you use. Whatever the reason it’s a recipe for disaster when you consider that it’s more poisonous than a cobra and it’s bite is almost painless.  It’s not uncommon for people to die in their sleep. Sleep tight!