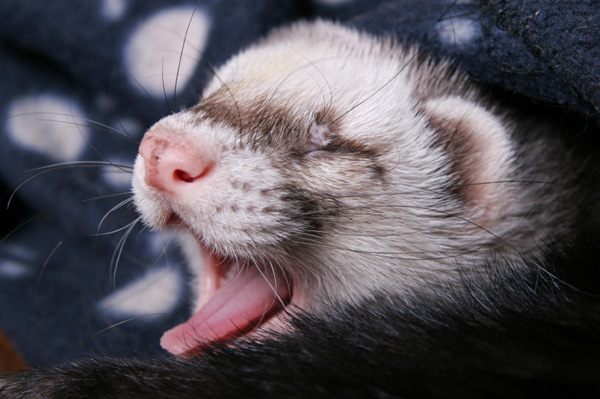 “Awww…he’s all tuckered out. Now he’s going to curl up in a nest of you’re socks he’s crammed behind the fridge.”

Ferrets, those mischievous masked scamps. They’re like slinky, sinuous, cats with comically long necks and bodies. These are affectionate, playful, inquisitive animals. If you get them descented they don’t smell too bad and they can be litter trained with some patience. In fact, a ferret or two would make an excellent addition to your home. Provided you can keep the darn things from killing themselves. Ferrets curiosity and energy mixed with the fact that they can squeeze into tight places pretty much guarantees that they’ll get themselves in trouble unless you ferret proof your house. If you thought babies were helpless and stupid, here are just a few of the many many things you need to do to keep your suicide prone weasel safe.

They love holes, so plug up everything. Don’t assume your ferret hasn’t crawled into your vacuum cleaner or your drain pipes (don’t turn on the garbage disposal!). Rocking chairs and fold out beds are pretty much blunt guillotines, so get rid of them. Keep your toilet bowl lid down or they’ll drown themselves. And they love to eat odd things, so watch what you leave laying around. Vets have pulled foam ear plugs, paper clips, erasers, rubber bands, mousepad pieces, Velcro, calculator keypads, stockings out of their stomachs. Always check the dirty clothes before throwing them on to wash because rodent blood will absolutely ruin a blouse. Make sure your medicine is kept in childproof containers and is out of reach (wait…seriously?). You should also probably look into getting your ferret a bright yellow helmet with a warning label that reads ‘special’.

“The cutest animal ninja of them all.”

This ferret-monkey-bear looking thing is not only cute, but also very playful. The Kinkajou is energetic, loves to leap and climb, has a prehensile tail like a monkey and will use you as it’s personal tree. It also has a six-inch long tongue. Which is all awesome right? And it’ll bite the ever-loving hell out of you if you mess up, just like it did to Paris Hilton…twice.

Even though their diet consists mainly of fruit they have extremely sharp teeth and a strong bite. Scientists don’t really know why this frugivore even needs friggin vampire-like incisors. What kind of fruit can’t be taken out with anything less than fangs? Regardless many owners swear that these creatures are gentle and affectionate. Just as long as you don’t crowd them too much, don’t make too many sudden movements, respect their territory and don’t wake them up during the day. It’s also recommended that let them have their own room cuz they need lots of space. You should probably give strong consideration to turning your entire life over to your Kinkajou. It would make things easier. (So yes, it’s exactly like being married.) Follow these simple guidelines and you’ll come away mostly unscathed…probably. They also live anywhere from 20 to 40 years, so be prepared to have this hyper, saber-toothed squirrel-chimp around forever. Oh, and in at least three states Raccoon Roundworms have been discovered in the feces of Kinkajou pets…which can be fatal to humans…and Kinkajou’s can’t be litter trained (or any kind of trained actually). 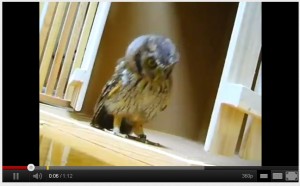 “Because chicks dig vicious killer bird that can maim and/or disfigure you for life.”

Wook, it’s a soft fwuzzy widdle owl. He’s so tiny and fruffy and wovable. I wants one! Friggin Harry Potter’s got an owl mom. Why can’t I have one? Well first of all it’s illegal. But who cares right? People still keep these things. But there are other reasons that should make you reconsider adopting one of these plushy raptors. Mostly, it’s because they’re birds of prey, so besides having razor sharp claws and beaks that can cut you, your furniture and virtually anything else in your house to shreds, they’ll also see any other pets as potential food. We can’t stress enough how powerful and sharp and their talons are. They can cut you to the bone just by being playful. Some of the larger owls have a grip of up to two hundred pounds per square inch. Humans can barely squeeze for twenty.

“You’re perfectly safe as long as you don’t stop petting him.”

And if the bird has imprinted on you then it’ll think you’re its mate. Which basically means it owns you and it’ll attack anyone who comes near you. I hope you don’t plan to date. During mating season it’ll hoot and screech all night long too. And you’d better darn well hoot back and you’d better act like you like it…if you know what’s good for you. And they won’t like anyone else but you which means only you can feed them, so no vacations away from home…ever. They also have special diets which consists of whole animals. They will also throw up everything they don’t digest, like livers and intestines, so be prepared to clean that loveliness up.

What is a Slow Loris? Watch these videos first:  Slow Loris

“Feed me! The cuteness compels you.”

Holy heck on a stick!!! That has got to be the cutest thing on the face of this forsaken mud ball we call earth! That precious guy is packing some epic, weapons grade adorableness. That innocent, wide-eyed little bugger is just begging to have the heck cuddled out of him. He’s such a slow, itty-bitty monkey. It’s like a tiny, fuzzy old man. Why doesn’t everyone have one of these sweet little raccoon sloths? Because they have poisonous elbows (no, seriously). The Slow Loris has special glands in their elbows which secret a toxin that causes rapid swelling and intense pain (it’s all true, why would we make this up?). They lick their elbows so that they’re bite can deliver this venom to the bloodstream (go ahead, try to lick your elbow). “This may look like a ‘don’t beat me’ pose, but in reality it’s getting its elbows in attack position.”

Owning one is illegal, because they’re endangered in the wild. Their poison also makes them smell like sweat socks. They like to bed down in dirty cloths hampers (cuz it smells like home probably). They have extremely sharp teeth and despite their slow appearance they can strike like lighting. The poison doesn’t kill, but it causes painful throbbing and swelling. These lovely flying squirrel-possums are small, cute and they love to play and run around. And the best part is they can glide! You and a friend can toss one around in the back yard like a baseball (please don’t). What could be more fun and adorable than an aerial hamster with stripes like an English badger? And then it pees on you. As a matter of fact, it’ll probably do more than pee. Sugar gliders have no real control over when they defecate. When they wake up, they pee. When they eat, they pee. When you take them out to play, they pee. But don’t worry, that probably means he likes you. Another great thing about sugar gliders is that they suck the juices out of their food. They don’t really ‘eat’ fruit. They just squeeze it to a mushy pulp and then they spit it out…all over the wall, the floor, the ceiling. These little critters are renowned for making a huge mess. They can also smell strongly (but maybe that’s because it’s covered in urine 24 hours a day). And don’t think you can get just one. Sugar gliders are social creatures and they need lots of attention or they might freak out and attack you or themselves or just straight out die. (Did we mention that in the wild they chew threw bark so you’re skin is laughably easy for them to peal away?) It’s best if you have two so they don’t get lonely. So that’s twice the mess, twice the smell but also twice the fun!

Oh, and they bark all night long cuz their nocturnal animals. Sweet dreams.

If you are looking to block out the insane barking of a sugar glider, or just the voices in your head you can try the memory foam sleep mask with headphone input from DaftGadgets.com