I am the most annoying dog in the universe

Yes, its a dog, but just barely.

Why Do Chihuahuas Bark?

The Scientific answer is still unknown, but its probably because Chihuahuas feel a need to live up to the expectation of being the most annoying dogs in the universe.

Will a Chihuahua Drive Me Mad?

Possibly.  A Chihuahua’s favorite game is to bark at you incessantly while slowly moving closer to you. If you move forward toward them, even just to say “nice doggy” and pat them on the head, they will scatter away so they can bark at you from a safer distance. Although this can make them useful as burglar alarms, it can also lead you to insanity if you have to confront a Chihuahua on any type of regular basis.

In fact if you take a poll, its our bet that 1 out of 10 animal “lovers” has had impure fantasies about kicking a chihuahua through a football field goal and yelling “Three points” 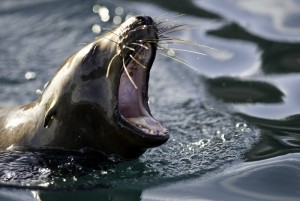 Both dogs and sea lions bark, but according to our most recent tests, only sealions can survive when held under water for extended periods.

Why Do Sealions Bark?

Unlike a Seal (which doesn’t bark) Sea lions bark as way of communicating. Male sealions have a more directional bark and are more likely to be barking “at” you, or other male sealions. This is a way of proving their dominance. Some scientists have suggested that sub dominant male sealions bark more than the dominant ones, possibly because they have something to prove, or maybe due to getting less mating time, scientists are still unsure.

Unlike testosterone drunken males, female sealions usually use their barking as a means of calling in their pups in for dinner, or just to make sure their pups haven’t been eaten by a polar bear. Each pup and female both have a unique sound to identify each other. This allows the female the ability to distinguish her pup’s voice  among hundreds of other barking sealions. Scientists feel this shows that a sealions bark may be just as unique as a human’s voice.

Will Sealions make me Nuts?

Unique or not, being surrounded by a few hundred barking Sealions is enough to drive anyone completely mad. 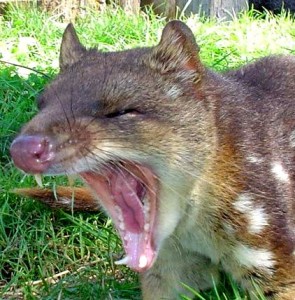 What the $%^# is a Quoll you ask? Its a “meat eating marsupial” that is a relative to the Tasmanian devil and native to Austrailia and Papua New Guinea.

Why does a Quoll Bark?

Usually because they are pissed off or alarmed. Dawkins and Krebs (science dudes) suggested that vocalizations that arise from changes in breathing are indicative of strong emotions. Yes, animals have emotions too.

Although some people feel they can keep a Quoll as a pet without going insane, we feel that the only people who would have one of these crazy bastards in their house must be insane already.

Why do you say that? Is the Quoll Dangerous?

It Ain’t nicknamed tiger cat for nothing. Oh yeah and it eats the hallucinogenic Cane toad, so there’s a chance it will be completely out of its mind if you ever come across one. We’ve seen enough Bugs bunny episodes to know that any friend of the Tazmanian Devil, is not something we want in our homes.

Why Does a Barking Gecko Bark?

Generally for mating and communication. Many geckos vocalize singularly but the barking geckos of the Kalahari bark in choruses. Of course  sometimes they bark as a way to get laid and other times they are pissed off mad and may be in a death match with another male.

Will it drive me insane?

It might. The barking Gecko holds claim to being “the noisiest gecko of all,” however some pet owners have found their barking to be quite relaxing.

Why does the Tree Frog Bark?

Because it wants others to know its raining for some reason. Mostly however,  it barks to get laid

Will it drive me nuts?

Remember when you were a kid and your younger sibling kept repeating everything you said? Maddening wasn’t it? Well, the female barking tree frog can accurately localize the bark of the male and accurately playback his own pickup lines.

Now that’s the type of conversation that could drive anyone crazy.

The call of the Kookaburra or “Barking Jackass” has been described as Maniacal by those unfortunate enough to be afflicted with such a sound. The bark of the Kookaburra has been said to begin like “the appalling ravings of a Madman”…and end in a prolonged sardonic chuckle.

Why do they bark

Aboriginals will tell you anything from “They are laughing at bad parents, particularly the Cuckoo bird.” to “they are laughing at the misfortune of two drowned children.” Scientists feel they probably bark as a way of announcing their territorial claims.

Will they Drive me insane?

It is said that the incessant barking of this Jackass is enough to drive a lost explorer into madness. As well, there are other aboriginal legends that depict the bird killing women in the middle of the night. On top of that, they are the only bird that stays at home after they learn to fly, so they have the added value of them all barking in one big happy family.

And you thought it was just dogs that bark.