Sometime in history after the invention of the phonograph, people got stoned and started turning records backwards to hear what they thought were hidden satanic messages.

Although probably self prophetic in nature, there have been a few messages that still have us scratching our heads thinking “Was that put in there on purpose?” “is this whole rock and roll fiasco really the music of the devil?”

The Good news is that most of these messages are probably just coincidence, and if not, you probably don’t have anything to worry about unless your Benjamin Button  (in which case you are probably going straight to hell.)

Now we know what you’re thinking.

You’re thinking of what a cool movie it would be to watch Benjamin Button go to hell. First he would live his life forwards making all his mistakes, and then he would have to fix them as he aged backwards so that he could get into heaven instead of hell.

In fact, maybe that’s what Benjamin Button was actually about. We don’t know because nobody here watched it.

Anyway, this article is about back masking and hidden satanic messages in songs that probably aren’t really there.

One of the most famous of all backmasking tracks, Stairway to Heaven emits what appears to be a “possessed” Robert Plant speaking demonic incantations with the repeating words “My Sweet Satan” There is then some more specific phrases about suffering in a tool shed which may or may not have references to Old Yeller’s final days of madness.

Either way, the official story is that any message heard while playing Stairway to Heaven backwards is just in your mind.

According to the Leprechaun who tells people to burn things, if you play the song “Hell Awaits” backwards it says “Yvan Eht Nioj” 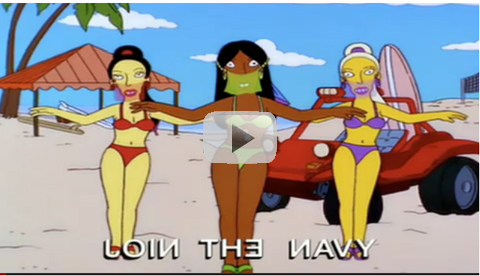 Oops wrong video, (we should know not to trust that leprechaun by now)

It actually says “Join Us” in Demon Talk.

Now one might think that this was a hidden satanic message, untill of course they heard the song play forwards, which has lyrics like:

“Priests of Hades seek the sacred star
Satan sees the answer lays not far
Zombies Screaming souls cry out to you
Satanic Laws prevail your life is through.”

With lyrics like these, its unlikely that they are trying to “hide” satanic messages and in fact, lends to the possibility that this is a satanic song played backwards with “Angel” messages in it.

3. Queen another one bites the dust – its fun to smoke marijuana

In the early 1980s, a bunch of Christian evangelists got together in an uproar about the Rock song by Queen “Another One Bites the Dust” .  No they weren’t upset about how the term “bites the dust” could relate to death and may warp the mind of a child.  They were much more concerned that there was a message in the chorus that could be heard when played backwards.

A spokeswoman for Hollywood Records  denied that the song contained any back masking or satanic ideology, and the way we see it, it is much more likely that this group of Christians got caught smoking marijuana and attempted to pass blame on a gay rock n’ roll star.

4. Nirvana at end of teen spirit

According to Urban legend, Curt Cobain didn’t like the smell of teenage girl’s armpits and attempted to create a hidden satanic message describing how he he felt that society viewed him as a child who is no longer cute because they have reached puberty, and now produce a smelly sweat that society doesn’t want to smell.

His message, when played backwards is heard as:

Because these lyrics are so similar in grammar to Curt’s regular writing style, most fans believe he is either speaking from beyond the grave.    Unfortunately his zombie was unavailable for comment.

Now for the 2 hidden messages that were meant for your ears:

When you play this song backwards you hear the words:

“I buried my Parakeet in the backyard. Oh, No, your playing the record backwards, watch out you might ruin your needle.”

Now some people might think that “Parakeet” is another term for “Pigeon” or “Rat” and that the b52s whacked someone and buried them in the backyard, while others may feel that they are poking fun at psychedelia and backmasking.

We’ll leave it up to you to decide The song “Empty Spaces” from the classic album “The Wall” is probably the most famous of all known backmasking messages.

When played backwards you will hear the following message:

“Hello, hunters. Congratulations. You’ve just discovered the secret message. Please send your answer to Old Pink, care of the funny farm, Chalfont.” (voice in background) “Roger! Carolyne is on the phone! Congratulations, you have found the hidden message.

Now we weren’t sure what type of prize we won, so we did like the record said and mailed away to Pink care of the funny farm. The Craziest thing was…..the mail we sent was delivered to us.

It was that moment that we realized that the hidden message was that we are all living in an insane asylum! Now, others have tried to convince us that we don’t live on the funny farm and that the mail was just “Returned to Sender” because the Pink Floyd message wasn’t a contest, but a joke.  We think they missed the hidden message behind “The Wall”.

To help create a complete list of backmasking songs head over to wikipedia and help update their backmasking list.