Unlike back in the 1960s, nowadays you don’t have to ingest some strange mushrooms or desert cactus in order to hallucinate. The drug of the modern day is technology, and we can’t get enough of it.

One way technology enhances our lives is by taking us into alternate universes, be it a 3D blockbuster movie, or an online gaming world of avatars, friends, foes, and more relationship categories than any boring “unplugged” society can dream up.

So why do we get so caught up in these computer enhanced realities?

Simple. Because they trick our minds into believing what we see is real, and we welcome it. But just because you enjoy the illusion doesn’t mean you should become fervently obsessed like some crazed Wrestling fan who is angry enough to fight his own friends because the rock cheated the night before in smack down.  At Daft Gadgets we support the occasional trip into fantasy, we just want to make sure we stay grounded.

So how does this technology trick us? Let’s take a look…….

Sometimes the independent parts of an image or object can distort the perception of an object as a whole. Most optical illusions are the result of inharmonious or discordant visuals at the ends of parallel lines, back ground patterns, high contrast areas, after images, or just the inability to comprehend or interpret the spatial structure of an object. (kind of like explaining a paradox to a robot)

Here are a few examples of how these illusions work and why seeing shouldn’t always = believing.

These types of illusions are thought to be caused by a physiological imbalance that alters the observers perception. By exposing the eyes to excessive stimuli (brightness, tilt, color, movement, etc) the brain creates individual dedicated paths in the early stages of visual processing leading to the imbalance in perception. These illusions are believed to be of a more “biological” nature.

Two examples physiological illusions can be seen below. If you stare at this picture for 20-60 seconds and then stare at white space you will see the reverse image. This version of physiological illusion is known as an after image.

Until recently the Hermann grid illusion was believed to come from a physiological imbalance that is explained by what is known as “lateral inhibition.” Here, the receptive field of the light and dark receptors become active with one another in a sort of battle between light and darkness in a Sith/Jedi standstill. This creates imaginary white/black hybrid dots in the grid intersections. Unfortunately, scientists now believe that lateral inhibition is probably not the cause, so it looks like Darth Vader and the darkside of the force are off the hook again.

These types of illusions are believed to be caused by inferences people make with their subconscious or rather “unconscious” minds. These illusions fall into broader categories being fictional illusions, (like those experienced by a schizophrenic or someone on a hallucinogenic substance,) Ambiguous illusions, Distorting illusions, paradox illusions, or a combination of more than one.

Ambiguous illusions are pictures that allow the observer two different points of perception. The Rubin vase is probably the best and most common example of an ambiguous illusion. 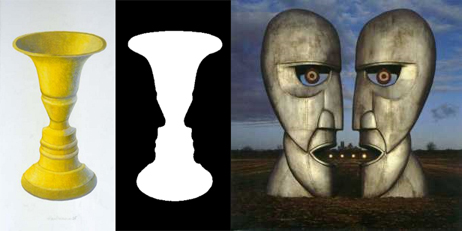 When shown an ambiguous illusion for the first time, the observer will often see only one interpretation. This is partly due to the power of a first impression created by the mind. When the brain interprets something, it has a tendency to focus and identify things based upon their surroundings. We don’t just judge people by the clothes they wear and who they hang out with, we also make judgments based upon things that stand out. Its kind of like if you saw $20 bucks lying on the ground, you’re not going to be focusing on the ground. When things don’t stand out, our minds tend to “create” the perception by shaping what it sees. This “shaping” function overrides the feature recognition process and essentially creates its own opinion of what is sees. Distorting illusions are characterized by distortions of size, length, or curvature. The “Cafe Wall” is an example of how “border locking” can cause a “deja vu” like chaos with our brain. Here the brain is actually making predictions of where the mortar lines will lead. You’ll notice, that only the parts “out of focus” appear to be bent or moving. In a sense, your brain is predicting the future.

This type of illusion uses images that are impossible to exist within a 3 dimensional universe. One example being The Penrose Square or Staircase

(remember the movie inception) The paradox illusion works by focusing the observer on segments of an object, rather than the object as a whole. For instance, if one were in a lucid dream, climbing a penrose stair case, they would probably believe that they are moving up, when in fact, they were only going in circles.

You may have seen this illusion while surfing the net. It’s based upon your brain not having a reference point for each individual snapshot. When this happens your brain chooses one for you and each picture interpreted after will use the same reference point as the first giving the series of pictures the impression of spin. If you look at the break down of the images below you can see that each frame can actually be viewed as a sort of ambiguous illusion that shows itself and its own reflection. Once you teach your brain to see both sides of the images, you will be able to change the perceived direction of the dancer simply by blinking.

Imagine how the dancer would look with each arm and leg as belonging to both her left side and right side.

There are many more examples of optical illusions found in everything from abstract painting and art, to 3D technology, to those crazy infomercials you see on TV at 3 AM. Today’s society is filled with some wonderful illusions that can capture your imagination and entertain you for hours on end. Just make sure you don’t actually “buy in” to everything you see. Seeing, shouldn’t always = believing.