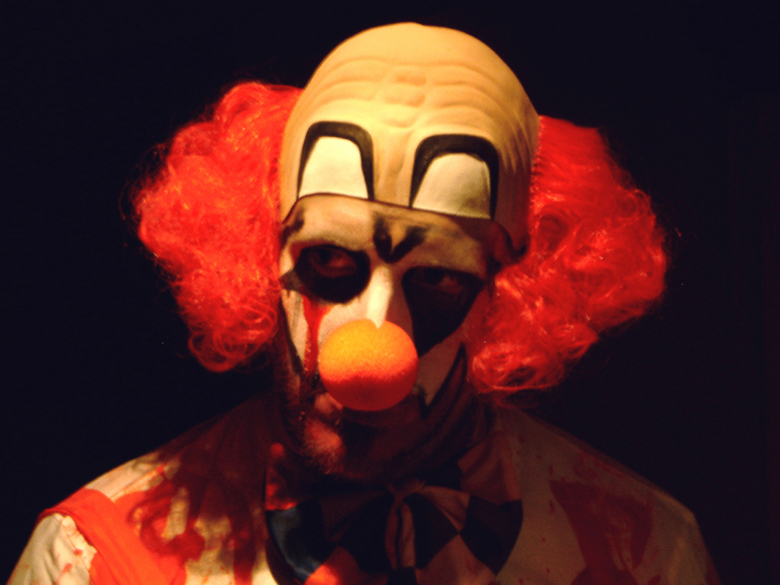 Coulrophobia, or “The Fear of Clowns” is much more common than most people realize.  At Daft Gadgets we have no idea why anyone would ever think a clown would be liked by children or anybody else.

According to a study conducted by the University of Sheffield, children find clown décor unsettling in hospital settings. Dr. Penny Curtis, a researcher was quoted as saying: “As adults we make assumptions about what works for children. We found that clowns are universally disliked by children. Some found them quite frightening and unknowable.”

Now at Daft Gadgets, we share a common Coulrophobic moment with a lot of others out there thanks to a movie called “Poltergeist.”

As such, we decided to put together a list of some of the most psychotic and evil clowns around.

The most obvious evil clown being……

Searching the internet for relief from our paranoid thoughts of clown killers under our bed, we came across many other sites and bloggers who have shared there experiences of evil clowns.

The photo above is compliments of thepoisonforest.com who are unfortunate enough to share in our moment of childhood horror that occurred when the happy poltergeist clown turned evil and dragged the young boy under the bed.

Because the Poltergeist Clown affected so many people, we felt the need to mention it first as a way of speaking out to let you all know that you are not alone.

Unfortunately, this also makes you a prime target for a practical joke, so its best to keep it quite. If you can’t find a clown, you can always try putting make up on an inflatable woman, which is a much more common thing to find under someone else’s bed and will not arouse suspicion.

The Fear Clown from Voyager

Who Could forget the evil clown from Star Trek Voyager?

What made this clown unique was that he was actually an incarnate of fear itself. The Voyager clown represented the manifestations of fear found within the minds of the characters trapped within a virtual reality artificial hibernation machine. Once his artificial intelligence became self aware, the clown attempted to maintain his survival by preventing anyone from leaving the virtual reality.

In this ironic twist, the fear of death of the participants within stasis ended preventing them from returning to life, and unfortunately, forced them to choose between facing a fear of death or a life of hell.

Killer Clowns from outer space was a B movie from the 1980s.

The plot revolves around an army of alien clowns who land their circus tent shaped spaceship on earth with the intentions of eating the inhabitants of a small town.

The clowns use different weapons to capture the townspeople including:

Since these methods come across as “daft” in appearance, nobody seems to take notice. If you ever run into one of these clowns, the trick is to shoot them in the nose.

UBU Roi is a play by Alfred Jarry that premiered way back in good old 1896. The central character is a clown by the name of Ubu, who is notorious for his child like engagement with his imaginary world.

Ubu inhabits a domain of greedy self-gratification and is the epitome of what Jarry saw to be the modern man. Ubu is fat, ugly, vulgar, gluttonous, grandiose, dishonest, stupid, jejune, voracious, cruel, cowardly and evil.

There is nothing likeable about this clown, which is probably why there has never been a Hollywood remake. Pennywise the dancing clown is known for luring children to their death.  As funny as that may seem, Pennywise is actually quite evil and sadistic.

He appears in clown form most of the time, but he has the ability to transmogrify into exactly what his victim fears most. This puts him on the toughness level of Darkseid, one of superman’s greatest foes. Captain Spaulding deserves mention as one of the weirdest and creepiest clowns around. Described as a crusty looking old man in a filthy clown suit and smeared make-up, Captain Spaulding is the patriarch of the Firefly family of Devils rejects, who are essentially a family of insane murderous lunatics.

Dressed in white and wearing black and white mask depicting duality, Pulcinella (often called “Punch”) is known as a mean SOB. His sadistic viciousness is only superseded by his cleverness.

To defend himself he pretends to be too stupid to understand what’s going on around him and if that doesn’t work he beats people physically.

He deserves mention mostly due to for his reputation of being the progenitor for which all evil puppets would later be based.

In Germany he became the puppet Kasper, in the Netherlands, Jan Klassen, in Denmark, Mester Jakel, in Romania Vasilache, in Hungary Vitez Laszlo, and in France he is known as Polichinelle.

All of these puppets share the story of a deformed and nefarious psychopath that typically ends up bludgeoning a bunch of people to death. His deformities may also suggests he may be embittered due to his suffering from Acromegaly syndrome.

Well ahead of his time, Pulcinella could be seen as the precursor of today’s modern slasher flicks, as well as being the first truly evil clown in show business.

“Well these are all just stories, in reality there’s no reason to fear clowns right? “

Uhhh….right. Just don’t look up “Pogo the Clown” and your Coulrophobia should stay cured.

Of course you can always pick up a light saber night light from the Daft Gadgets Shop if you’re really worried.