A Classic line from the movie Bar Fly. Mickey Rourke’s portrayal of the alcoholic writer Henry Chinaski is absolutely Epic. A pugilistic street drunk with class, Rourke gives us a humorously insane view into the life and mind of Chinaski’s author character.

The Movie Bar Fly is set in Chinaski’s personal hell, a hell he seems to need and somewhat enjoy.  Throughout the movie he delivers his lines as if he is some sort of royalty, a drunk above all the other impoverished drunks. Even when he gets the #$%t kicked out of him he seems to do it in style.

At one point he is so drunk he cant even get his key in the door lock and instead kicks it down.  Upon solving his dilemma, he immediately passes out in a chair.  Of course when he wakes up, he begins to realize that he’s in someone else’s apartment, and raids the fridge on the way out.

He’s right at rock bottom with nothing to lose, and he walks around like he owns the place. Not only does he constantly fight losing battles, he enjoys it. He also seems to have a cool line for almost any chaotic circumstance. At one point he stands up to a knife wielding maniac with with his fists and ends up gutting the guy who remarks “nothing but dumb luck” to which Rourke smiles and points his finger saying “Yeah, but that counts too” Hes a bitter foul mouthed alcoholic who beats up kids and bangs women in his Santa suit.

Yes, he actually beats up a kid, but its not how it sounds. Okay, it is how is sounds, but he does it in a funny way. Essentially Billy Bob Thorton is an unloved Bad Ass Drunk, who only thinks of himself. He gets befriended by a young boy, who is being looked after by his senile grandmother. Billy moves in and finds that the young boy brings about a spark of goodness in him. At first, he just likes the fact that the kid is bringing him his morning vodka. After a while though, the Bad Santa starts to “feel” human again. When he sees the young kid being bullied by a larger kid, he steps in and beats up the lead bully. Of course, to be fair he did try and give some parenting advice in this memorable scene:

Bad Santa: Jesus, kid. When I was your age, I didn’t need no fucking gorilla. And I wasn’t as big as one of your legs. Four kids beat me up one time and I went crying home to my daddy. You know what he did?
Kid: He made it all better?
Bad Santa: No, he kicked my ass. You know why?
Kid: Because you went to the bathroom on mommy’s dishes?
Bad Santa: What the f%^k? No!
Kid: He tried to teach you not to cry and be a man?
Bad Santa: No. It’s because he was a mean, drunk, son of a bitch. And when he wasn’t busy busting my ass, he was putting cigarettes out on my neck. The world ain’t fair. You’ve gotta take what you need when you can get it. You’ve gotta learn to stand up for yourself. You have to stop being a pussy and kick these kids in the balls or something.
[the kid stares at Santa]
Bad Santa: Or don’t. Shit. I don’t care. Just leave me the hell out of it.
Kid: Okay. Thanks Santa. 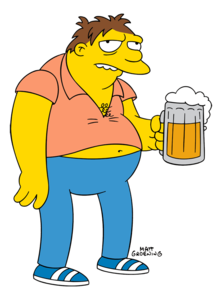 Barney: I'm Barney Gumble, and I'm an alcoholic. Lisa: Mr Gumble, this is a girl scout meeting. Barney: Is it? Or is it that you girls can't admit that you have a problem?

Hes the drunk of the drunks and has crazy lines like: “In case you get hungry, there’s an open beer in the fridge.”

Barney was actually inspired by “Barney Ruble” of the Flintstones, as sort of a sidekick for Homer. Later the writers would draw inspiration from a character called “Crazy Guggenheim” from the Jackie Gleason Show, and “Norm Peterson” from the 80 classic sitcom “Cheers”

Barney was even able to make a serious in depth look into his alcoholism seem light hearted by naming his biographic documentary “Pukahontas” which won first prize at the Springfield’s Film Festival over a man getting hit in the groin with a ball.

He had the tenacity to take former heavy weight boxer Joe Frazier outside one on one. He also bullied homer out of the snow plow business and was accepted into one of Nasa’s space programs.

Britain’s The Guardian once said that Barney “Should be hailed for making compulsive drinking a source of comedy on US TV, a hitherto impossible dream.”
Perhaps they were right.

Dr. Necrosis: You are not what I expected Agent Tag. Although your disguise as a buffoon was most convincing.

He acts out the personality of 8 Drunken gods

A young trouble maker Wong Fei Hung (sometimes dubbed as “Freddie Wong”) seems to have a penchant for getting into trouble. First he teaches an overbearing assistant martial arts teacher a lesson in humility. Then, he hits on a woman as to impress his friends, only to get his ass handed to him by her older female guardian. Finally, he beats up a young punk who just so happens to be the son of one of the town’s most influential men.

Wong’s father steps in with disciplinary action and sends Wong to be trained by a martial arts master named Begger So. It just so happens that this master has garnered a reputation for crippling his students during his training. Wong decides to flee rather than face his punishment, but finds himself in trouble once more for stealing a meal from a local restaurant owner. Luckily, when fighting off the staff of the restaurant, a drunken bum from the street comes to Wongs aid and helps him escape the brutal onslaught. Unfortunately for Wong, the drunkard turns out to be Beggar So, the Drunken Master.

The training is an effective comedy of drunken errors from 8 drunken immortals and is probably the perfect role for a young Jackie Chan.

The Drunker he gets the tougher he gets

When drinking a potion right before the movies final fight, Wong gets a Popeye effect and becomes a serious contender for Yan (The Boss at the end of the Movie) Yan counters by resorting to his secret technique, the Devil’s Shadowless Hand, which Wong is unable to defeat. Wong confesses that he did not master the 8th last style so Beggar So tells him to combine the seven styles and create his own version of the 8th style in a sort of “Jeet Kune Do” fashion. The culmination of the 7 styles with wongs interpretation give birth into a new 8th Drunken God fighting style and Wong becomes the new Drunken Master. I don't advise a haircut, man. All hairdressers are in the employment of the government. Hair are your aerials. They pick up signals from the cosmos and transmit them directly into the brain. This is the reason bald-headed men are uptight.

He drives a Jaguar Mark 2, drinks lighter fluid and Fishes with a Shot gun. What more can we say?

Withnail and I gives us a view into the ups and down of two struggling, unemployed actors during the disillusionment from the 1960s love movement, into the 1970s disco era. Withnail is the overly flamboyant alcoholic contrasted by his anxiety obsessed friend Marwood.

Withnail is the embodiment of scorn and indignation over life’s injustices, and spends his days getting coins to use in the meters that provide gas or electricity, waiting in line for social security payments, or waiting for the bars to open their doors so he has a nice warm place to get drunk.

Withnail and I has to be mentioned in the list of Badass Funny Drunks, even if its black comedic scorn is a little depressing and disturbing.