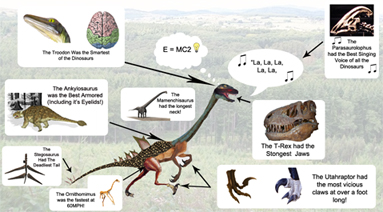 For those of you who read Mr. Skinner’s book titled “Billy and the Cloneasaurus” you are probably familiar with the idea of scientists in the future bringing dinosaurs back from the dead using advanced cloning techniques.

At Daft Gadgets we figured if the scientists were so advanced, why are they still making copies of things mother nature did over a million years ago? Why not splice a little and see if you can improve upon the design. After all, the original dinosaurs were a failure, and everyone knows two wrongs don’t make a right, so what do we have to lose?

Here is a design for the ultimate dinosaur, the best of the best to rule them all! First and foremost, a dinosaur has to have a killer bite. Yes, we contemplated a poisonous bite like a snake and a bacterial bite like a Komodo dragon, but in the end we figured it was probably best to just clone the T-Rex’s head.
T- rex could gulp you down whole or masticate you into mush, depending on its mood. It had the strongest jaws of all the dinosaurs and huge teeth for chowin’ down

In a dino eat dino world, a big bite is important to survival. However, a well developed brain means a more clever and cunning bread of dinosaur.

The Troodon had a very large brain size for its body, and was probably the smartest of the dinosaurs. Unfortunately is was still probably dumber than today’s modern birds, which finally proves Alfred Hitchcock’s movie “The birds” is a scarier in concept than Hollywood’s “Jurassic Park.”

The Dromiceiomimus may have had a stupid beak looking face, but it also had the fastest legs in town. Capable of running 60 km per hour, this dino was like a 12 foot long greyhound.

Anyone who has ever played a game of Street Fighter II against the annoying Dhalsim knows that reach is one of the most important aspects of any fight.

The Manenchiasaurus had the longest neck of all the dinosaurs, stretching up to 45 Feet! In our version, the scientists of the future adapt the neck so that it can enter into its protected body like a turtle (or Bowser from Super Mario if you prefer) and it can strangle you like an anaconda.

If you think this is too far fetched you really need to re-read Billy and the Cloneasaurus.  It explains everything. Armor built like a tank war machine the Anklyosaurus boasted a club like tail and even fully armored eyelids! It’s name actually means stiff lizard, but there are too many jokes that can be made about this so we are moving on to the next aspect. The Stegosaurus carried the most lethal tail of them all, called a “Thagomizer.”  The Thagomizer was basically a tail with 3 foot long (1 meter) spikes at the end used to bash other dinosaurs brains in. The Stegosaurus didn’t have to worry about getting its brains bashed in however,  since its brain was only the size of a ping pong ball.

#7. The Most Vicious Claws

Correct us if we’re wrong but we feel that retractable slashing claws are probably one of the better weapons to have if you live in Jurassic Park.

The Utah Raptor definitely had the most vicious claws of all the dinosaurs at  12 inches long. They have an almost “Thumb like” appearance which means they could probably grab hold of some pretty big prey.

Nothing says I love you like a song, and we all know that procreation is the most important aspects to the survival of a species.

The Parasaurolophus was like a musician. It could trumpet though hollow crest that emerged from the back of its head. This could be used to scare off attackers, communicate with offspring, call or signal for help, or it could have been used in some sort of mating ritual.

….Yes we know that pun was horrible and we kept it in anyway.

If you want to dig up a dinosaur at home you can check out the T-Rexcavator Game for some archeologist type fun! 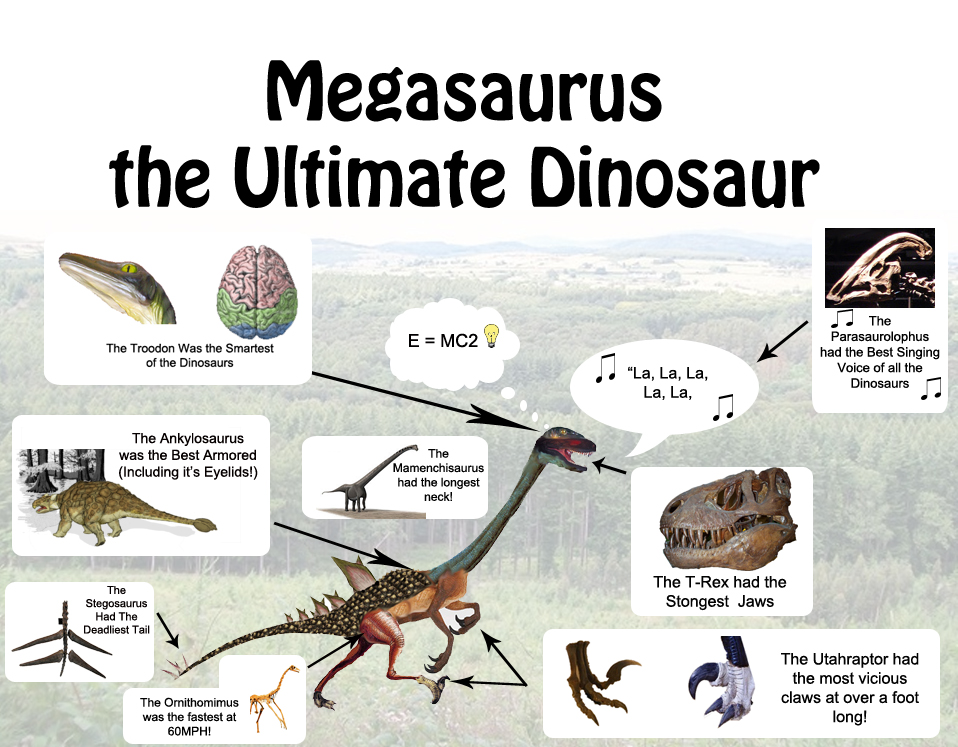