“Where does he get those wonderful toys”

In the superhero world nobody is waiting for the next android, Zune, or iPad. The hype for heroes and villains alike is saved for the release of a new spy gadgets from “Q” or Wayne Enterprises (although more and more villains are beginning to import knock off Bat gadgets from China)

Of course, most true superheroes invent their own gadgets using their genius intelligence or vast resources of their personal corporations, or organizations.

We’ve compiled a list of some of the best comic book gadgets off all time, starting off with the iconic classic…..

Batman’s Motto is essentially “#$%^ happens, be prepared!” Yes, he was probably a boy scout at some point in his life and got all the badges.

Batman’s utility belt epitomizes the boy scouts motto by having everything he needs from Bat shark repellent to night vision Bat Goggles. It is almost magical in that there seems to be an accessory in the utility belt to vanquish any impediment.

Some of the more popular items in batman’s utility belt arsenal include:

Bat Cuffs: For when Batman wants to get kinky with Cat Woman or Poison Ivy
Batarang – Kinda like an Australian ninja star
Bat Darts – Tipped with tranquilizers bat darts are great for the pub or when you just want to sit around and poke yourself
Bat Goo Gun – You never know when some goo can come in handy
Bat tool kit – Most likely this was his first tool kit given to him when he was a kid and he just hasn’t had the heart to sell it on Ebay yet
Bat Saw – Just in case he gets caught by Jigsaw
Cash! – Yes Batman carries cash, the official currency of lap dancers

The utility belt is sort of a cheat since in uses many gadgets in one, kinda like finding a Genie and wishing for more wishes. We know its not fair, but it has to be brought up.


#2 The Attache Case of Agent Graves.

Remember Jules from Pulp Fiction? He was the one carrying around this wallet:

The mystery case in his right hand however has nothing on this next gadget though. (Or maybe it does since we don’t actually know what was in Jules’ briefcase. Damn You Tarantino) Either way, the attache case of Agent Graves is nothing short of cool.

The contents of the case are:

The whole immunity angle give someone a completely uninhibited view into the morality of revenge and power above the law.

Graves’ Attache case certainly gets our imagination going in more ways than one.  What would you use it for? Or should we say who?

Before Hollywood ruined Spider Man’s story by making his web shooters a power of his body instead of his mind, Peter Parker’s web developing genius was used to defeat multiple types of enemies with a plethora of different webbing options.

The Web shooters can also be used for other liquids as well (like alcohol shots!) 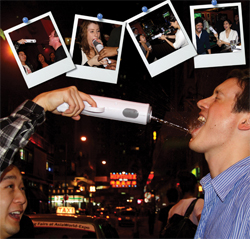 which could make spider-man the life of the party. As well, they have been modified to fire darts and function as a protective bracelet for Mary Jane.

There are some so called “scientists” from the history channel telling us that if web fluid were to exist, it would not be possible for spider man to store the necessary propellant and fluid in such a small cartridge. Therefore, organic webbing is a more realistic alternative. We say “They only think that way because obviously they’re not as smart as spider-man is.” Nuff said. It looks like an ordinary blind mans cane, but to those who know the true identity of Matthew Michael Murdock (We mean Daredevil, not Ben Affleck) the cane is a metaphor for a wolf is sheep’s clothing.

The Cane functions as a multi-purpose weapon and tool that contains thirty feet of aircraft control cable connected to a case-hardened steel, while its grapnel is capable of some serious @#$ Kicking power.

It’s simplicity makes this weapon’s efficacy limited only by the skill of its user, which in this case is preternatural. 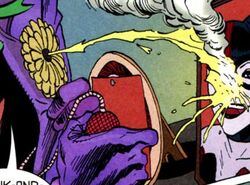 Okay, the joker doesn’t have a utility belt for his bladed playing cards, exploding cigars or harpoon guns equipped with bang flags. Now his lethally electric joy buzzer can be quite humorous, but we would rather be laughing with him on the way out that have him laughing at our dead corpse.  Something about the joker venom says “At least they died happy” Now maybe laughing to death is a really painful and excruciating way to die or maybe you’ll just get a deformed face from some joker acid. Were just saying that given the choice between Dying at the hands of the Jokers favorite weapon and Spider Jerusalem’s weapon of choice, the Jokers flower wins no contest.

Yes, it delivers what it says. The device comes with full level controls to allow its user to experience anything from simple diarrhea to complete rectal prolapse.

The bowel disruptor has been known to cause unconsciousness due to such high levels of pain and discomfort. It also has a setting labeled “Fatal Intestinal Maelstrom” which we can only conclude would be something like firing an Imodium suppository into someone with a bazooka.

Sorry, no photo. You’ll have to use your imagination.